This is the home page of the textbook "Modern Robotics: Mechanics, Planning, and Control," Kevin M. Lynch and Frank C. Park, Cambridge University Press, 2017, ISBN 9781107156302. This page is under construction. 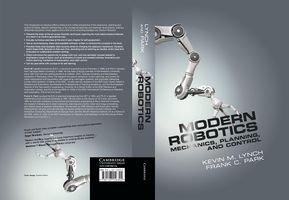 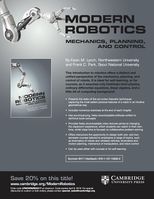 Advertising flyer for the book, with discount code.

This book is the result of course notes developed over many years for the course M2794.0027 Introduction to Robotics at Seoul National University and ME 449 Robotic Manipulation at Northwestern University. The evolving course notes have been posted on the internet for years to support these classes. The date of the compilation of the book is noted on the front page.

The current, and final preprint, version of the book is dated November 2016. We posted a "beta" version of the book in early October 2016; that version should no longer be used. Since the October version we have implemented a number of corrections, clarifications, minor restructuring, and expanded coverage of certain topics. We also gratefully acknowledge the forewords provided by Roger Brockett and Matt Mason.

We are posting four versions of the book. All versions have exactly the same contents and pagination. They differ only in the sizes of the margins and the size of the print, as manipulated after latex'ing in Adobe Acrobat. Two of the versions have working hyperlinks for navigating the book on your computer or tablet.

These files have been compressed to about 7 MB. Let us know if you have any problems reading them. Please note that recent versions of the default Mac OS X pdf reader, Preview, is known to have some bugs displaying certain images in pdf files. If a figure is not appearing properly, please try a better pdf viewer, like Acrobat Reader.

We welcome your comments and corrections! Please click here to report any corrections for the book. (Please make sure you are using the November 29, 2016, version of the book.)

The origin of the software is student solutions to homework exercises. In September 2016, Northwestern MS student Mikhail Todes produced the first version of the software for distribution. The software will be updated as bugs are discovered and fixed. As of October 2016, the software distribution should be considered a beta version. A major revision will be coming in January 2017.

You might also be interested in Peter Corke's excellent Robotics Toolbox for MATLAB and other robotics software linked to from his site.

We have found the V-REP robot simulation environment to be a valuable learning tool accompanying the book. It is free for educational use and cross platform. In ME 449 at Northwestern, we use it to experiment with the kinematics of different robots and to animate solutions to inverse kinematics, dynamic simulations, and controllers. This page provides "scenes" that allow you to interactively explore the kinematics of different robots (e.g., the Universal Robots UR5 6R robot arm and the KUKA youBot mobile manipulator) and to animate trajectories that are the results of exercises in chapters on kinematics, dynamics, and control.

Sometime early in 2017, more videos supporting the book will be posted to YouTube and linked to from this wiki. The videos will be made with Northwestern's Lightboard. If you are interested to learn more about what these videos might look like, you can check out the mechatronics videos at http://nu32.org.

You can see an excellent collection of robotics videos at the Springer Handbook of Robotics Multimedia Extension.

Kevin M. Lynch is Professor and Chair of the Mechanical Engineering Department at Northwestern University. He is a member of the Neuroscience and Robotics Lab and the Northwestern Institute on Complex Systems. His research focuses on dynamics, motion planning, and control for robot manipulation and locomotion; self-organizing multi-agent systems; and physically interacting human-robot systems.

Frank C. Park received his BS in electrical engineering from MIT and his PhD in applied mathematics from Harvard University. From 1991 to 1995 he was assistant professor of mechanical and aerospace engineering at the University of California, Irvine. Since 1995 he has been professor of mechanical and aerospace engineering at Seoul National University. His research interests are in robot mechanics, planning and control, vision and image processing, and related areas of applied mathematics. He has been an IEEE Robotics and Automation Society Distinguished Lecturer, and received best paper awards for his work on visual tracking and parallel robot design. He has served on the editorial boards of the Springer Handbook of Robotics, Springer Advanced Tracts in Robotics (STAR), Robotica, and the ASME Journal of Mechanisms and Robotics. He has held adjunct faculty positions at the NYU Courant Institute and the Interactive Computing Department at Georgia Tech. He is a fellow of the IEEE, current editor-in-chief of the IEEE Transactions on Robotics, and developer of the edX course Robot Mechanics and Control I, II.