In Chapter 4, we will study the forward kinematics problem for open-chain robots: finding the configuration of the robot's end-effector

The goal of this project is to test your understanding of the matrix log for rotations, to give you a little practice using the MR library of functions, and to familiarize you with CoppeliaSim.

You will submit a single zip file that includes a single pdf file and one video (make sure we can play it) to Canvas. The file name should be FamilyName_GivenName_asst1.zip (for me, it would be Lynch_Kevin_asst1.zip). You will have to concatenate all your responses and screenshots into a single pdf file.

In part 1, you will explore some of the functionality and built-in models for CoppeliaSim. Go to this page for a refresher on getting started with CoppeliaSim.

A CoppeliaSim scene may include objects (like shapes, joints, or sensors) and one or more models. A model consists of a number of objects connected to each other.

Models can have sensing and motion capabilities as defined by their attached child scripts. A child script can be threaded (which creates a new computation thread; this is generally discouraged) or non-threaded. A non-threaded script defines the "actuation" and "sensing" functions for an object or model, and these functions are invoked by the main script at each simulation step. More information can be found at Coppelia's webpage on main and child scripts, the CoppeliaSim User Manual, and the CoppeliaSim forum.

Default models can be found in the model browser (left pane, or open the pane by clicking the robot icon in the left toolbar).

Part 1A: Building a world for a mobile robot

In this part, you will explore the CoppeliaSim model browser and learn how to create your own scene using the default models. Anything in the model browser can be dragged and dropped onto the checkerboard floor of the scene. It can then be moved or reoriented using the Object/item shift and the Object/item rotate buttons in the top toolbar (the cubes with the arrows around them). Also try using the controls at the top of the window to zoom the camera in and out, pan the camera, etc.

Use File>New scene to create a new blank scene. Add to the scene the Pioneer_p3dx, a mobile 2-wheeled differential drive robot with 16 sonar sensors, to the scene. (Find it under "robots/mobile" in the model browser). Clicking the Start/resume simulation button (the "play" button) will cause the robot to move forward at a set velocity. To see where this behavior is defined, stop the simulation and open the child script associated with the Pioneer robot. (Make sure the simulation is stopped, not just paused.) You can open the child script by clicking on the folded paper icon in the left toolbar and double-clicking "Child script (Pioneer _p3dx)" or by double-clicking the folded paper icon next to "Pioneer_p3dx" in the Scene hierarchy pane. You can see the variable v0 that defines the forward speed, modify it, and play the simulation again to see the robot move at a different speed.

The robot moves forward until the sonar sensors detect an obstacle, which causes it to turn as described in this article about Braitenberg vehicles. (See if you can make sense of the algorithm by looking at the code.)

Next, add a terrain bump (find terrain_bump.ttm under "nature" in the model browser). Single click Bump in the scene hierarchy to bring up the customization UI. Use the sliders to modify the geometry of the bump so that the Pioneer_p3dx can drive over it. NOTE: None of the sliders should be at the minimum settings. If you need to edit the bump later, make sure the simulation is stopped (not just paused).

Add at least five 80cm high walls to the scene (find them in infrastructure/walls/80cm high walls" in the model browser). Arrange and orient the walls such that when the simulation is started, the Pioneer_p3dx interacts with at least three of the walls and drives over the bump at least once. To interact with a wall means to drive towards it and avoid bumping into it.

Part 1B: Exploring the UR5 Scene 1

Open Scene 1 for interactive manipulation of the Universal Robots UR5 robot, a popular 6R robot. (You can go to the CoppeliaSim Introduction to download Scene 1 and the other scenes used in this course). In this scene, there is a model of a UR5 robot, which consists of a collection of joints connecting shapes (links), from the base out to the end-effector.

Make sure your scene 1 simulation is stopped so you can open up a script. Click the "Scripts" button on the toolbar on the left side of the screen (shown below) to see the scripts being run by the scene. 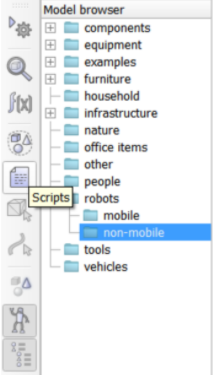 The XML code for the UI starts on line 251. This XML code controls the appearance of the Custom UI, including the layout and content of text boxes, sliders, tab titles, and font size. The XML syntax can be found at Custom UI Plugin XML Syntax. For this specific scene, the different text boxes and sliders are arranged in different groups. Each group has a layout which determines how the objects inside the group will be displayed and label text which determines what text will be displayed and how it will be displayed. If you'd like, you can consult the XML syntax for the attributes each element can have.

Your task: Modify the UI_Script to change an aspect of the scene, and you will use this modified scene for Part 2, below. For example, you can choose to change the Custom UI layout, change the titles and words of the Custom UI, or change font sizes in the Custom UI. Some example changes include:

The 6R UR5 robot is shown below at its home configuration. Eight frames are defined: the fixed frame {s} at the base, frames {1} through {6} attached to links 1 through 6, and the end-effector frame {b} which is fixed relative to link 6. (The frame {b} is not shown in the image.) The red arrow is the x-axis, the green arrow is the y-axis, and the blue arrow is the z-axis. Frames {s} and {1}-{6} are aligned when the robot is at its home configuration, i.e., each rotation matrix Rij (where i,j could be s or any number 1 through 6) is the identity matrix. 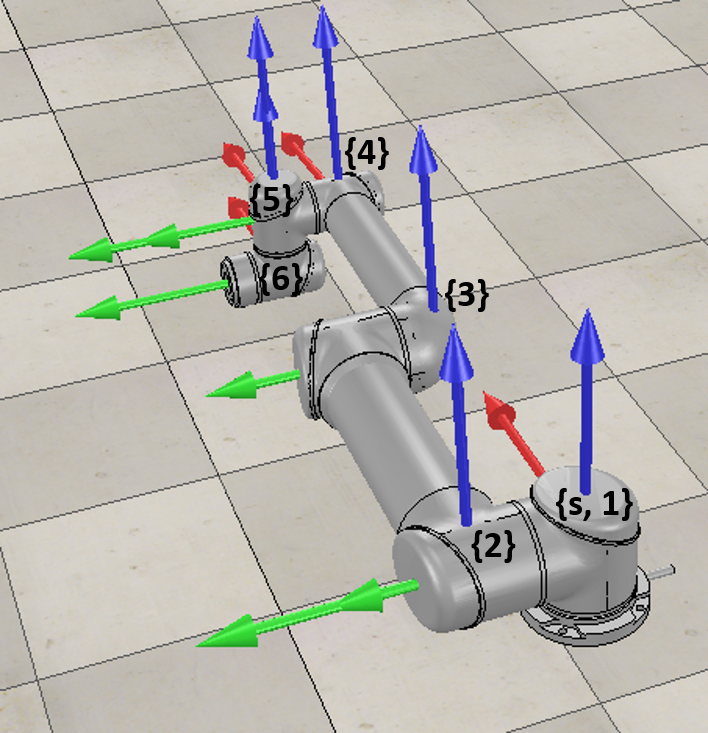 The rotation axes for joint i, defined in frame {i}, are

For some set of joint angles θ, we have the following relations between the orientations of the joint frames:

where {b} is the end-effector frame not shown in the figure.

What to Submit via Canvas

Turn in a single zip file. The file name should be FamilyName_GivenName_asst1.zip (for me, it would be Lynch_Kevin_asst1.zip). This file should have:

The contents of your zip file should look like the below (with your name):

If you do not know how to take a screenshot, you can use one of the following: