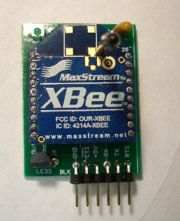 You can read XBee API packets with MATLAB using the fread() function if you are using API Mode 1, if your packets are the same length. When using fread(), you can specify how many bytes to read, and which data type the bytes should be interpreted as (integer, float, etc.). However, when using API Mode 2, fread() becomes tricky to use because the escape characters will insert another byte into your packet. One way around this is to read all the data as chars, process the escape characters, and then use the MEX function fourChar2Float to convert the chars into a 32-bit floating point number.

A second XBee radio was connected to a PIC184520 with a 40MHz crystal. Using the PIC-C programming language, the XBee radio is controlled using the pic's hardware EUSART. A variety of baud rates were tested as listed in the table below.