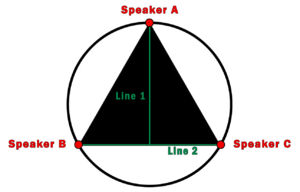 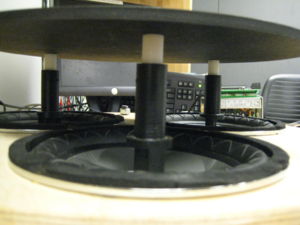 The PIC would step through the sampled sine wave, stored in program memory, and send the values to the DAC. Since we need 3 individual sine waves, we selected the Maxim MAX520, a quad DAC IC. It uses I2C with which our PIC easily interfaces and a simple message protocol.

The PIC has a sine wave stored in program memory in the form of a look-up table (LUT) (really not necessary but larger projects might need this). The main code simply steps through the LUT and outputs that value to the DAC. This will create a "stepping" sine wave, which get smoothed out by the passive LPF before the signal is sent to the power amplifier. There is a interrupt service routine that occurs every .825 seconds to alternate between two orthogonal line sinks, to create a node to which a time piece will go. Additionally, every 10 seconds within the interrupt, the time is changed in that the position of the node moves to the next hour. Our code has the hour positions hard coded and simply steps through all of them. More positions can easily be added for better resolution, which would be useful in an hour hand.