The purpose of this page is not to teach you how to use V-REP. Rather it is to describe demonstration scenes that have been developed to help visualize robot arm kinematics. If you are interested in learning more about V-REP, check out the Useful Resources section below.

The scenes below are implemented similarly. They both feature a simulation of a kinematically-controlled, non-respondable UR5 robot from Universal Robots. Kinematically controlled means that all dynamics (inertias, torques, friction, etc.) of the system are neglected. We can specify a set of joint angles and the simulation is capable of instantaneously "teleporting" the robot to be at the new set of joint angles. Non-respondable means that the links of the robot are not capable of interacting with the world or each other through collisions. In other words, we can put the robot in configurations that result in self-collisions, but the simulation will ignore the collisions. The physical UR5 robot features 6 joints each with 720 degrees of rotation, and this simulated robot has the same joints and limits. The model of the UR5 in each of the scenes was created by importing a URDF from the ROS-Industrial ur5_description package.

In each scene, there is a single Lua script called a Non-threaded child script. When the scene is first run, there is a function that is called that sets up the GUI and creates variables that are going to be needed later on in the simulation. Then during every step of the simulation the main script, which is part of every V-REP scene, runs an "actuation" function from the child script. This actuation function is responsible for processing all of the changes to the GUI since the last time it was called (buttons clicked, label updates, etc.), and for sending joint commands to the simulated robot. Technically, there is also a "sensing" function in the child script that gets called by the main script, but in each of these demos, the sensing function is empty. The GUIs are both built with V-REP's Qt-based custom UI framework.

In this demo, the GUI features two tabs. One tab lets you drag sliders to modify the joint angles of each joint, and the other tab allows you to specify comma-separated angles for all 6 joints in an editable text box and ask for the SE(3) transformation from the base frame to the end-effector frame. The frames attached to the base and end-effector are persistently displayed (x-axis in red, y-axis in green, z-axis in blue). Note that all angles are specified in radians.

This demo allows you to specify a CSV file containing a trajectory of joint angles, and then animate this trajectory. Each column of the CSV file is the joint angle through time for one of the joints (first column is joint 1, last column is joint 6). In other words, a single row of the CSV file represents a complete configuration of the robot at a particular time. The assumed timestep between rows is equal to the timestep that V-REP uses for simulation; the default is 0.05 seconds. Note that will need to provide a complete path to your CSV file. Alternatively, you may be able to provide a relative path, but you'll need to figure out what V-REP uses as its base directory on your OS. On Linux, this directory is the root directory of the V-REP source code. If you figure out this directory, you could also move your CSV files to be in this directory and just reference them by name without specifying the path at all. A typical path on the Mac is something like /Users/kevin/yourdirectoryname/example.csv. 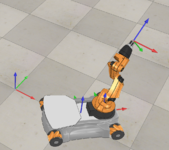 The KUKA youBot is a mobile manipulator consisting of a mecanum-wheel omnidirectional base and a 5R robot arm. This scene is similar to the UR5 interactive scene. You can interactively control the configuration of the mobile base and the arm. 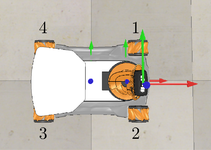 This scene is similar to the UR5 animation scene, except now the csv file consists of 12 configuration variables per row: 3 for the mobile base (ordered as x, y, phi), 5 for the arm (joints 1 to 5), and 4 for the wheels (ordered as you see in the figure on the right). If you don't want to show the wheels moving, or if you have not correctly solved the kinematics relating the wheel motions to the mobile base motion, you can just set all 4 wheels angles to zero.