The LS7166 is a powerful quadrature decoder/counter chip. A motor's encoder can be connected directly to the LS7166, which will decode and count pulses as the encoder channels change. Using a parallel data bus, a microcontroller can simply read the current count value from the chip, allowing a project to interface with motor encoders without using any additional timers.

In this document, the LS7166 is interfaced with a PIC32, but the code could be ported to work with a PIC18.

The LS7166 is a 24 bit quadrature counter. The A and B inputs normally serve as quadrature inputs, like those which come from a quadrature encoder like those on most motors. The A and B inputs can also server as up / down counter inputs, so that the LS7166 can be used for other applications as well. The internal counter can count in binary, BCD, or in time units (hours/minutes/seconds). In any motor-related application, binary counting is necessary. The chip can also operate in divide-by-n mode, which loads the count register with a fixed value on rollover. This is useful for motor applications, since the fixed value can be set to the number of pulses in a full rotation, and then whenever the count value is read, the exact position of the motor can be known no matter the amount of time that has passed since the last read. The chip has several other features that can be read about in the datasheet. The code in this document only covers divide-by-n binary quadrature mode, and for more advanced features the support code will need to be modified.

The LS7166 communicates with a microcontroller via a bi-directional 8-bit data bus and several control bits. Four of the contorl bits, /RD (read), /WR (write), C/D (control or data), and /CS (chip select), are required for communication. Two other control lines, LCTR/LLTC and ABGT/RCTR are for more complex features and can usually be tied to Vdd or GND as needed. There are also two pins which output flags when programmed events occur, such as an overflow. For more info on these features, see the datasheet. Note that most pins are active low, and thus must be kept at high at all times unless in use. If multiple chips are used (for interfacing to multiple motors), all the communication lines can be reused except /CS (chip select).

The following is a list of registers and the general use of each, even though they are already handled by the code written in a later section. 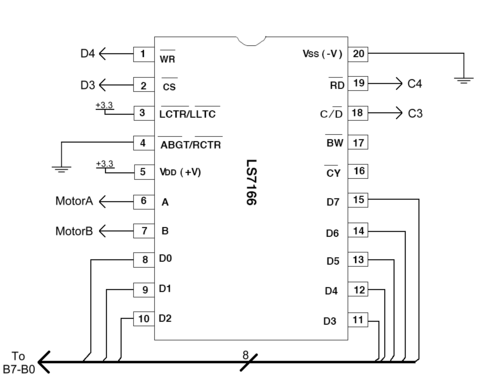 The LS7166, as mentioned above, connects to the PIC via an 8-bit data bus, 4 control bits, 2 optional control bits, and 2 optional flags. In the code below and example schematic, pins B0-B7 are used for the data bus. These pins can be changed, but the data bus read and write functions will need to be changed to interface with bit lines instead of bytes. Since this was put in the separate function, other code won't have to be changed, other than TRIS setups.

As mentioned above, multiple LS7166 can be used which are connected to the same data and control lines, except for chip select, which needs to be separate for each chip. The code will also have to be modified to toggle specific /CS lines during reads.

NOTE: this code still has a slight bug: at overflow the CNTR doesn't roll to 0. This will be fixed soon

The code consists of three files:

All three can be download from this zip file.

This c file contains various functions used to interface with the LS7166. The init_7166() function should be called before using any other functions. The init function can be modified to utilize other special features of the chip not used here. Note that at the end of the init function, the counter limit value is loaded into the PR register. This number should be changed based on the full rotation count of the encoder in use.

The other primary function that will be used is read_reg(OL), which returns the value from CNTR after transferring CNTR to OL. Most other functions will usually not be needed unless special features are needed.

This c file simply loops continously and reads values from the LS7166. Note that to use the 7166, the only steps are to setup the pins, call the init function, then call the read function to get a value.