THIS PAGE APPEARS TO BE OUT OF DATE AND SHOULD PROBABLY BE ELIMINATED. See RGB Swarm Robot Project.

The swarm robot project has gone through several phases, with each phase focusing on different aspects of swarm robotics and the implementation of the project. This entry focuses on the most recent phase of the project, covering topics such as, but not limited to, Xbee Interface Extension Boards, LED light boards, and changes made to the Machine Vision Localization System, and the overall conversion to LED boards and a controlled light environment. These entries help provide insight into setup and specific details to allow others to replicate or reproduce our results, and to provide additional information for those working on similar projects or this project at a later time. Other articles in the Swarm Robot Project category focus on topics such as the swarm theory and algorithms implemented, as well as previous phases of the project, such as motion control and consensus estimation. You may reach these articles and others by following the category link at the bottom of every page, or through this link - Swarm Robot Project.

As you may draw from the circuit diagrams above, as each photodiode receives light, a certain amount of current start to flow through the photodiodes and generates a voltage across R1 = 680K. Each photodiode is designed to detect the certain range of wavelength of the light, and the amount of current flowing through the photodiodes is determined according to the amount of the corresponding light to each photodiode. The op-amp (LMC6484) takes the voltage generated across R1 as the input signal, amplifying it by a ratio particular to the circuit. This ratio is also known as gain, and is defined by resistance of the potentiometer. The now amplified output is then sent to the analog digital converter, which on the e-Puck had been used as the X,Y, and Z axis accelerometers. This convenient, as each accelerometer axis can be used as a channel for the color sensors three colors. The converted signal can then be used to measure the response of the color sensor to light. The corresponding equation for the circuits illustrated above are as follows:

takes as an input

The gain of the color sensor circuits is approximately 20. Thus, the input voltage, Vi, is amplified to be 20Vi, which is Vo. As mentioned above, the gain can be adjusted properly by controlling the resistance of the potentiometer.

have a pattern composed of 4 dots 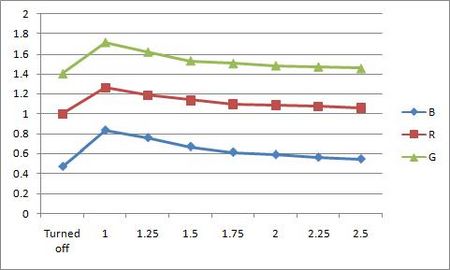 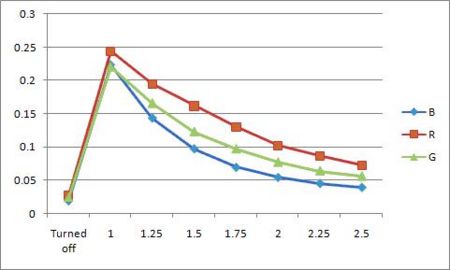 4. Angle between LED and color sensor is increased by 15