Stability of an Assembly Project

This page describes the "Stability of an Assembly" Project from the Coursera course "Modern Robotics, Course 5: Robot Manipulation and Wheeled Mobile Robots."

Your assignment will be graded on: 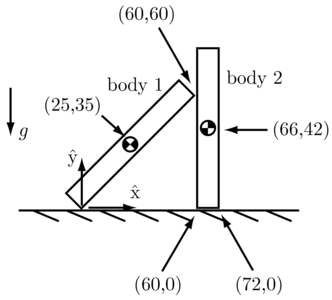 You will write a program to determine if an assembly of planar rigid bodies, in frictional contact with each other, can remain standing in gravity (where gravity acts in the − y direction), or if the assembly must collapse. (See Example 12.11 and Figure 12.27 in Chapter 12.3 of the book.) An example assembly is shown in the image at right.

Your program will take as input:

Ideally your input would be in an argument to the program function call, or in an easily edited external file that can be read by the program.

The output of your program will be binary: it is either possible or impossible for the assembly to remain standing. Your solution method is likely to use linear programming (linprog in MATLAB, LinearProgramming in Mathematica, or scipy.optimize.linprog in Python). If you find a solution to the contact vector k (see Example 12.11) and standing is possible, then it is recommended that you also output k. This represents one set of contact forces that would keep the assembly standing.

Important note for Python users: A Coursera student mentioned a bug in an earlier version of linprog, apparently occurring when using the 'simplex' method for solving linear programs where the equality constraints are specified by a matrix that is not full rank. One solution is to use the interior point method by adding the option "method='interior-point'". See the discussion at https://github.com/scipy/scipy/issues/6690.

Unlike the form and force closure linear programming tests, where the elements of your contact vector had to be greater than or equal to a positive value, in this problem the elements of your contact vector only need to be nonnegative. (You are only trying to find one solution to the assembly equilibrium equations; in the form and force closure tests, you needed to show that the contacts could create arbitrary wrenches.)

Your biggest job in this programming assignment is taking the specifications of the bodies' mass properties and the contacts and turning them into static equilibrium equations of the form Fk = b, similar to Example 12.11 in the book. These equations are solved by linear programming with the constraint that the elements of the contact vector k must all be nonnegative. If you have m bodies in the assembly, you will have 3m wrench balance equations, and if you have n contacts, you will have 2n friction cone edges and therefore 2n elements in your contact vector k.

First test your program using the assembly shown in the image at the top of the page. Your only freedoms in specifying the assembly are the masses of the bodies and the friction coefficients at the contacts.

You will submit a single .zip file with the following contents:

1. Your commented code in a directory called "code." Your code should be lightly commented, so it is clear to the reader what the code is doing. No need to go overboard, but keep in mind your reviewer may not be fluent in your programming language. Your code comments must include an example of how to use the code. You can write your program in any language, provided it is clearly structured, reasonably modular, easy to understand for a reader with no experience in your programming language, and with sufficient comments. Your program can span multiple files, or it can be a single file, if appropriate. If your code is in Mathematica, turn in (a) your .nb notebook file and (b) a .pdf printout of your code, so a reviewer can read your code without having to have the Mathematica software.

2. A directory called "results." In this directory you should have

3. (OPTIONAL). For the three-body arch in Figure 12.27 in the book, assume all three bodies are identical, with the same masses and friction coefficients. Use your program to determine the minimum friction coefficient that keeps the assembly standing.

4. (OPTIONAL) A plain text file called "README.txt" or other explanatory file. This has any other information that may help the reviewer understand your submission.