A level shifter chip is necessary to convert the high and low logic voltages from the desktop computer (+12V/-5V) to (+5V,0V) for the PIC. A standard RS232 connection is called a DB9 connector and follows the pin diagram shown here: http://www.aggsoft.com/rs232-pinout-cable/serial-cable-connections.htm This cable requires 1 driver installation as included on the mini-cd. To install this driver, you must first plug in the USB cable, and run the installation program located on the CD corresponding to the model on the USB Cable (<CDROM>:\HL-232-340\HL-340.exe). This driver is also available online at this link: http://129.105.69.13/pic/usb_drivers/HL-340_USB_serial/. To configure the Matlab script to connect to the proper serial port, use the device manager (Right click My Computer->manage) and expand the section "Ports (COM & LPT)". Make a note of the COM port number corresponding to "USB-SERIAL CH340" as listed in this section. In our program, our serial port was COM4. A picture is shown below of how to get this information in the device manager. 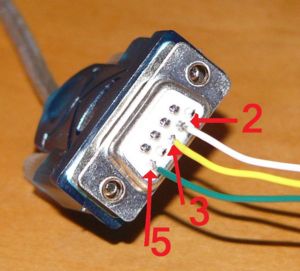