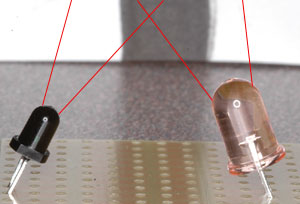 Retroreflective tape comes in many varieties and colors. Retroreflective tape utilizes prism crystals imbedded within a resin matrix which internally reflect light such that it is reflected back in the direction from which it arrived. This makes the tape highly reflective, provided that the observer (or sensor) is closely located with the source of light.

Quality retroreflective tapes can be obtained from manufacturers such as 3M, but less expensive versions can be obtained through sporting good stores, where they are used as reflective strips for nighttime activities. Common applications of such tapes include vehicle markings, emergency floatation device markings, and motion analysis markers.