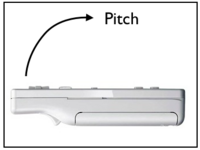 The code for the PIC is not as complicated as the wii code. Basically, all the PIC needs to do is monitor a UART port and based on the data it receives either set digital outputs to HI or LOW. The UART stuff is all handled by an ISR, and interrupt service routine.

The code may look long, but the theory behind it is very simple. Depending on what character is read from the UART, some pins will ether be HI or LOW. For example, when the "A" character is read from the UART, pins D4, D3, D10 and D9 are all depressed. The layout of the solenoids make the correspond to a G chord. When the user releases the "A" button, the character "N" is sent. Looking at the if branch for that character, it is evident that everything turns off. Indeed the character "N" is like our "off" switch.