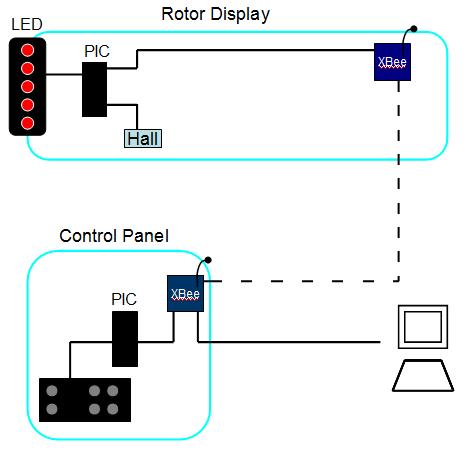 In order to avoid the complication of wiring a spinning object, all of the major components of the POV display were placed on a platform mounted on the output shaft of a 6W Maxon motor. The components of this rotating platform include a PIC Microcontroller, a panel of 14 bright white LEDs, a Hall switch, an XBee radio, and a battery pack to power the assembly. The strip of LEDs was mounted vertically (or parallel to the axis of rotation) at one end of the platform. To minimize wobbling of the assembly while spinning, the components were positioned such that the center of gravity of the panel passed through the axis of rotation.

Wireless communication between two PICs via XBees was used to enable live updating of the display based on user input: one PIC (the "display" PIC) was used to control the POV display and receive wireless information from a second PIC. This second "controller" PIC was used to receive user input and transmit it to the display PIC.

In the first mode of operation, the controller PIC transmits previously stored data to the PIC on the rotor panel. By varying the resistance of a potentiometer on the control panel, the user can choose between eleven "canned" messages.

In the second mode of operation, the controller PIC is connected to a computer via USB. Using a Java program written by Gregory McGlynn, the user can draw pictures or type letters in real time on the computer screen and on the POV display.

To allow for accurate portrayal of the desired image, a Hall switch was utilized to implement position sensing. The Hall switch was mounted near the end of the rotor display platform and a magnet was attached on the top of the base box. The magnet was positioned directly under the path of the hall sensor such that each rotation of the platform triggered an electrical pulse. The display PIC was programmed to reset the image cycle each time a pulse was sensed from the Hall sensor. This allowed reproduction of a stationary image.

Using this implementation of the Hall switch, the display POV was programmed to calculate the rotational velocity of the POV after each rotation by timing the interval between pulses from the Hall switch. This allows for correction of pixel column spacing, such that the column width is consistent even at different speeds. As such, the display may function properly without any information from the motor about its speed. 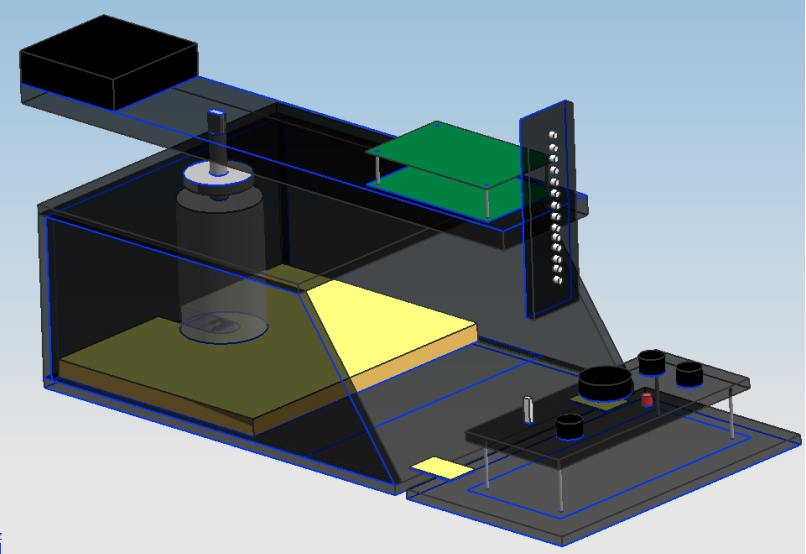