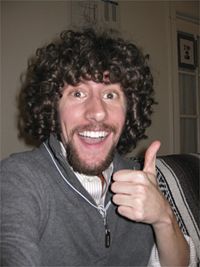 It is often useful to send signals from one PIC to another wirelessly. One way to achieve this is to use XBee communication. XBee chips use radio frequency waves to send wireless signals. These chips can basically replace other, wired forms of communication like RS232. 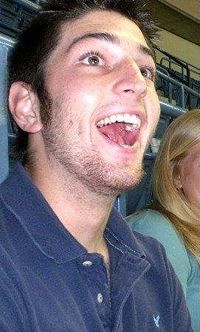 To accomplish this, we have written code for two PICs which control two XBee chips. One PIC-Xbee combination is responsible for sending a signal and recording the time it takes for that signal to come back to it. The second PIC-XBee combination recieves the signal from the first PIC and echos it back. To time the process, the first PIC sets a digital output from low to high just before sending out its signal. When the last character of the signal is recieved back, the PIC sets the output pin low. This low-high-low pulse is observed and timed using an oscilloscope.

Several factors can affect the speed at which the process happens. For one thing, XBee chips are able to communicate using various baud rates (the rate, in bits per second, signals are sent and recieved). Another factor that can affect the speed of wireless communication between two PICs is the size of the message being sent. To see how each of these changed the communication time, we ran two experiments. First, we varied the baud rate of the system while holding the size of the message constant. Then we varied the size of the message while holding the baud rate at a maximum. A third experiment was developed to see if the distance between the two communicating XBee chips would affect the latency time, but no changes were observed within the confines of the Mechatronics lab.

The arrows symbolize an elementary view of the signal flow during the timing process and Pin D1 was used for clocking the trip time by setting it high and low. 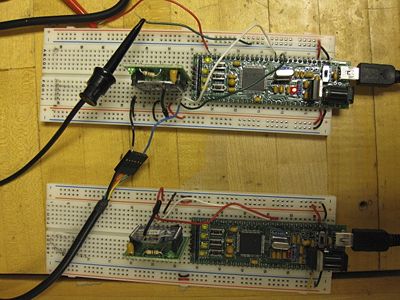 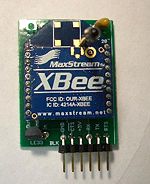 The pinout of the XBee chip can be seen in the image to the right. Note the RTS and CTS pins on the XBees were not used during the experiment. Notice how the XBee chip is constructed so that it can be stuck into a solderless protoboard or plugged directly into a RS232 cable. We were using the standard version of Digi's XBee chip, but they sell a "pro" version which they claim works up to a mile away. The advantage to this is that both the pro and consumer versions of these chips have the same pin-outs and they are interchangeable. That is, the XBee chips are removable from the XBee Interface Board wherein the pro and standard versions can be used.

We conducted the experiments at various BaudRates and this involved reprogramming the XBee chips. This was easy to do, but required the use of special software. Digi's [X-CTU] is hyperterminal-like software which allows for easy interface between a computer and the XBee chips. After downloading and installing it, the chips can be reprogrammed. The steps to reprogram the chips with different BaudRates are as follows:

Note that after reprogramming the chip, in order to continue using the terminal to communicate with the chip you will have to change the BaudRate settings in X-CTU. This can operation can be done from the the computer tab. You can select various standard BaudRates from the dropdown menu. If you want to make sure the chip has been correctly reprogrammed, you can change the BaudRate in X-CTU and then try to reconnect with the XBee chip by typing "+++" in the terminal. If you get an "OK" response then the chip has been correctly reprogrammed. For more information on using X-CTU and XBee chips, see XBee radio communication between PICs.

The code below is for the transmitter XBee chip. Note that the message string includes only one period, and the period is the last character in the message. The program know it has recieved the whole message back from the reciever when it recieves the period.

The message string that was sent ended in a period and there was only one period in the whole message string. We used this to assure that the entire string was read before assigning the digital pin that clocked the entire transfer process to low.

The table below summarizes our results. We ran two experiments. The first involved varying the baud rate while holding the baud rate constant. We sent a message of 90 bytes consisting of the phrase: "Would you like paper or plastic today, sir? Remember, plastic is bad for the environment." (without the quotation marks). Notice there is only one period in our message and that it is at the end. When the program sees the ASCII value for the period it knows that it has captured the entire message. We performed each test 3 times and averaged our measured time results using an oscilloscope hooked up to Pin D1.

We also conducted an experiment to see the absolute speed messages could be sent varying the byte size. We programmed the XBee chips to broadcast at the highest allowable BaudRate, 115200 bps, and then sent messages of varying lengths. The results can be seen in the table below.

We discovered that at message sizes above about 150 the message would get truncated and not all of it would be echoed back. We reasoned that it had to do with buffer sizes. Throughout all the tests, we kept the buffer in our program at 64. The XBee chip also has an internal buffer. These buffers are similar to the buffer for websites such as youtube.com. If the buffer isn't fast enough, then you have to wait while the video loads. We think that if the buffer size increases, you may be able to send longer message sizes without them getting truncated, however we were unable to perform these experiments due to time constraints. 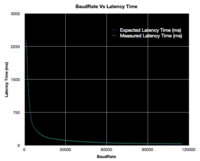 The graph at the right shows the relationship between varying the BaudRate and its effect on the latency time. The expected latency time and our experimentally obtained latency time were very close. It got less and less accurate, however, as the BaudRate increased. This makes sense because the factor of four added to simulated the total "distance" the message had to take played a much more substantial role. At very high BaudRates, the time for the PIC to communicate with the XBee can add to the lag time. 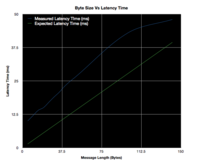 The graph at the right shows the latency time vs byte size. Each test was done twice and the results averaged. The XBee chips were programmed at the highest BaudRates, 115200 bps and the byte size was increased by 5's up to about 50. We observed that at message sizes above about 150, the message would get truncated and not all of it was transmitted. As discussed above, we believe the buffer is the main culprit for this. The main behavior of the graph is mostly linear, which seems to make sense (up to the ~150 byte threshold). Because the XBee chips are operating at their highest allowable BaudRate, the time lag between PIC and XBee communication plays a much bigger role. Again if the buffer were increased, we believe the two lines would get closer to each other. However, considering the timesteps we are dealing with, the expected and measured times are only off by about 10 ms which is still very good.