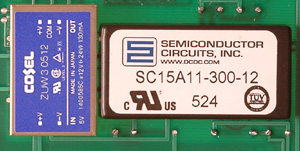 The whole stack, including the BoB, DAQ, and CPU boards, needs about 1.3 amps at 5VDC. If you are running the WET54G ethernet bridge as well, the total will be just under 2A. Any current your project draws from BoB's 5VDC supply (or its +12 and -12 VDC supplies) will add to that total.

BoB generates its 5VDC by using a DCDC converter described earlier. This DCDC converter is quite flexible about its input voltage; it's happy with anything in the range of 9-18 VDC. 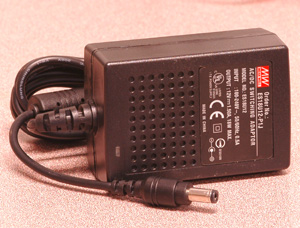 There are a number of ways to provide 9-18 volts to the DCDC converter. Most of the time you can use a plug-in adapter. The one shown provides a regulated 12VDC at up to 1.5A

The DCDC converter can provide up to 3A of current at 5VDC. 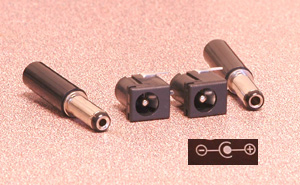 The wall-plug switching power supply has a barrel-type connector; male on the supply and female on BoB (there is some ambiguity about the anatomy.)

There are a lot of barrel type connectors. The ones we will be using for 9-18VDC are 5.5/2.1mm, which are the OD and ID of the plug respectively.

5.5/2.5mm plugs and jacks are quite common too; both are shown in the photo. They are hard to distinguish visually.

We will use the more common center-positive convention, which is what the symbol in the inset shows. 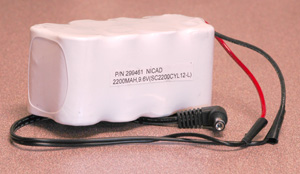 For mobile projects, you may want to use a rechargeable battery pack. You can use anything in the 9-18VDC range.

Warning. If you short a rechargeable battery pack, very large currents will flow. It can get hot very quickly, and may catch fire or burst, spattering you with hot caustic toxic chemicals. Treat it like a car battery. Having a barrel connector on it helps a lot. Loose wires or clips are a hazard.

If you are putting a barrel connector on a battery pack, use a prefabricated molded connector with wires (as shown in this photo); don't use a do-it-yourself connector (as shown in the previous photo) which is prone to shorts. Strip one wire from the battery pack and solder it to the molded cord and insulate it, before you strip the other wire. This way the battery's wires can't touch accidentally while you work on them. Test for center-positive with a voltmeter. 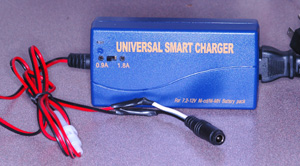 You can charge a variety of battery packs with this smart charger. I've added a molded inline jack so that it connects easily to the battery pack. There's an inline fuse, too.

Do not use clips. 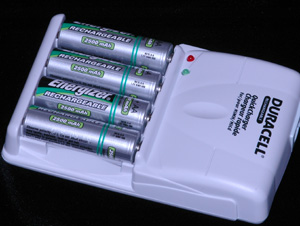 You are also welcome to make up your own battery pack out of rechargeable AA cells, which are now easy to get up to 2500mAH. The smart charger above will handle up to 10 of them in series, a nominal 12V pack.

Or you can use off-the-shelf chargers like the one shown here. 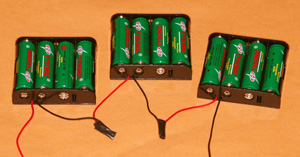 Power for your project 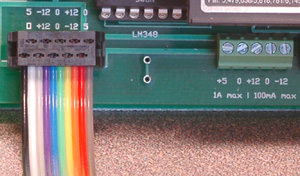 You can draw power for the electronics of your project from BoB's DCDC converters.

Up to 1A at 5VDC and 100mA at +12 and -12 are available. If you exceed the capabilities of the DCDC converters, they will "hiccup", shutting down and trying to restart over and over. You will see the +5 and +/-12 indicator LEDs go on and off if this happens.

You can use the terminal block to make connections, or a ribbon cable. The pinout for the ribbon cable is shown above it. Pin 1 is on the upper right, and is the brown wire in the photo. It's labeled "0" for ground. 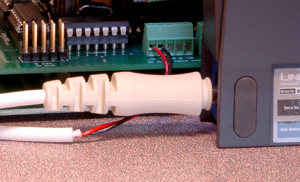 Do not use BoB's supplies for running motors and other high power things. In fact ideally you should use a separate battery pack for these, not share the one that powers the stack.

To power the WET54G ethernet bridge, use a molded 5.5/2.5mm barrel connector and cable, and connect it (center-positive) to the +5VDC and ground connections of BoB.

Don't connect your 12VDC chargers or wall-plug supplies or battery packs to the ethernet bridge, which expects 5VDC. We'll try to stick to this convention:

Suppliers for all parts are listed on the parts list