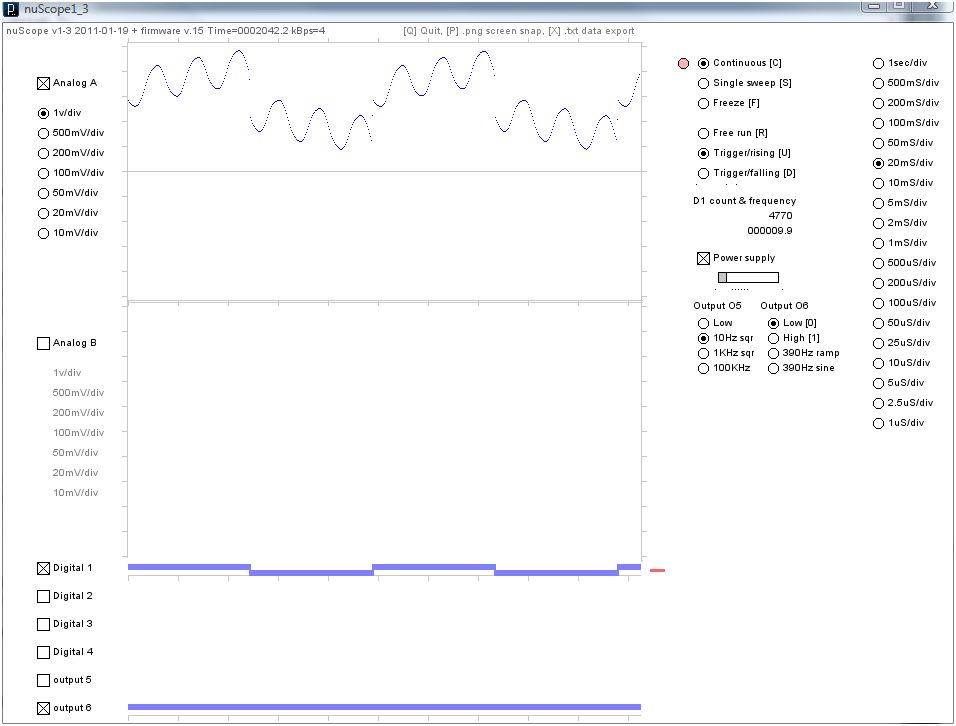 Analog oscilloscope. There are two analog oscilloscope channels which are digitized at 100,000 samples/second. These are the Analog A and Analog B traces. Using the radio buttons to the left of the trace, you can adjust the sensitivity of each channel between 1 volt/division (+5 to -5 volts full scale) and 10mV/division. The "divisions" are the gray tick marks on the vertical axis, shown below. Note: The analog channels don't work when the power supply is disabled.

Sweep speeds. The sweep speed can be adjusted between 1 second/division and 1 microsecond/division. In the trace display there are 10 divisions horizontally, indicated by the gray tick marks.

Sweep modes. Sweeps can run continuously, or you can freeze one sweep. You can select Continuous or Freeze modes using the radio buttons (as shown below), or the equivalent keystrokes C or F. Each time you click Single Sweep (or type S) one new sweep will be displayed, and then frozen.

Triggering. In general the graph will "roll" as new traces overwrite old ones, because the waveform is not at the same point in its cycle as each sweep begins. This is Free Run mode. To get a stable view you can freeze one sweep.

Frequency counter. Digital input D1 is connected to a counter. A display shows the total count of pulses on signal line D1, and below that the present frequency of pulses in Hz.

Signal generator. Signal lines O5 and O6 can be shown on the scope just like the four digital input channels D1 - D4, but instead they are digital outputs generated by the scope hardware. O5 can be selected to produce square waves of several frequencies. O6 can produce sine waves and ramps. The outputs of O6 are not true analog signals, they are pulse-width modulated digital signals. For instance the sine output is a 1MHz square wave with a duty cycle that varies sinusoidally. To get a smooth sine wave you need a low-pass RC filter to get rid of the 1MHz component.

Keystrokes. Most of the available keystrokes are marked on the corresponding radio button. Some that aren't are these:

Power supply - The nuScope unit provides power supply "rail" voltages for your circuits: +5V and -5V with respect to ground, at up to about 80mA. Red and blue LEDs indicate the +5V and -5V rails; green LEDs indicate the G (ground) rails. The color stripes on your solderless breadboard won't necessarily correspond to the LED colors; trust the LEDs. The LED colors tell you which supply voltage each rail carries.