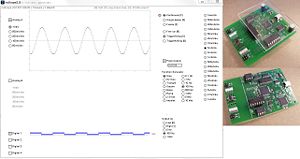 Analog oscilloscope There are two analog oscilloscope channels which are digitized at 100,000 samples/second. These are the Analog A and Analog B traces. Using the radio buttons to the left of the trace, you can adjust the sensitivity of each channel between 1 volt/division (+5 to -5 volts full scale) and 50mV/division. The "divisions" are the gray tick marks on the vertical axis, shown below. Note: The analog channels don't work when the power supply is disabled.

Signal Signal line do is a digital output generated by the scope hardware. do can be selected to produce high, low, 5Hz, 100Hz, or 1000Hz square waves. 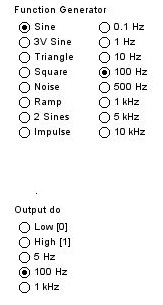 Power supply The nuScope unit provides power supply "rail" voltages for your circuits: +5V and -5V with respect to ground, at up to about 100mA. Blue and red LEDs indicate the +5V and -5V rails; green LEDs indicate the G (ground) rails. The color stripes on your solderless breadboard won't necessarily correspond to the LED colors; trust the LEDs. The LED colors tell you which supply voltage each rail carries.

If you select the correct port and everything works, you should see a moving trace, or, if the power supply is off, you will see a red "flat line" graph instead. Don't worry about the waveform; you should see motion.

Source code for the Processing ap is in the NuScope2-0 folder.

Older Versions of the nuScope