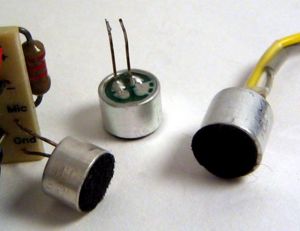 where Q = charge in coulombs, C = capacitance in farads and V = potential difference in volts, resulting in an electrical signal. Electret microphones, a type of condenser microphone, replace the externally-applied charge with a permanently fixed-charged material. The electret is a stable dielectric material with a permanently-embedded static charge. Electret microphones require no polarizing voltage but, due to their integrated pre-amplifier, require a small amount of power either from microphone inputs as phantom power or from a small battery. Due to mass-production of these devices, electret microphones lack the precision needed for high-quality microphones.