A "clapper" device will be built using a PIC 18F4520 and an electret microphone (in this case, the 423-1024-ND from digikey) as an analog input. The device operates on the principle that the microphone will convert the sound into an analog input to the PIC and as the sound increases in volume, the analog input's amplitude will increase. This input is then converted into an output on the set of LEDs soldered onto the PIC's circuit board. This output works as a light bar; it displays the minimum one LED for quiet sound levels and activates additional LEDs as the sound becomes louder -- up to a maximum of eight. The sensitivity of the microphone is adjustable through a gain potentiometer. 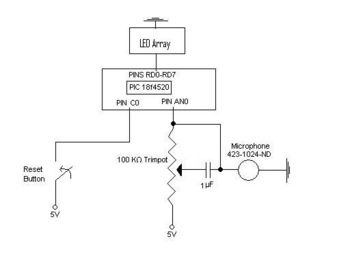