This is a machine vision system that tracks multiple targets and can send out the positions via the serial port. It was developed specifically for the Swarm Robotics project, but can be adapted for other uses. It is based upon the Indoor Localization System, but has several enhancements and bug fixes. Refer to Indoor Localization System for a basic overview of the setup of the system and the workings of the pattern identification algorithm.

Setting up the Cameras

The cameras are set up and operate as described in the Indoor Localization System entry, but with one change: targets at the border of the camera frame are now discarded. This changes prevents the misidentification of patterns if one or more dots in the pattern fall off the screen, but it also means that there must be enough overlap that when the target is in the dead-zone of one camera, it is picked up by another camera.

2. Install Microsoft Visual Studio Professional (Express Edition is incompatible with some of the code)

The project will probably not compile right after you open it. You will have to put the correct directories into the environment. In Visual C++, go to

and select Include files in the drop-down menu. Add (the directory paths on your computer may be different depending on your system, and the versions you installed.):

select Library files from the drop-down menu and add:

The purpose of camera calibration is to map from pixel coordinates in the camera's image to coordinates on the floor. We assume that the camera can be modeled with the pinhole model; all rays of light from the floor pass through a point and are projected onto the camera's image. Essentially we are mapping points from one plane (the image) to another (the floor) through a point (the pinhole). Homography is the mathematical term for this type of mapping when the camera has little distortion.

Suppose we have a group of points on the floor

and their corresponding image coordinates are

. Using (ui,vi) and (xi,yi), we need to figure out hij. We follow the procedures in Section 5.2 in Image Formation and Camera Calibration and obtain the following equation:

Since there are 8 parameters (hij) to obtain, we need at least four points on the floor, i.e.

. Once we obtain M and C from the point coordinates in the image and on the floor, it is easy to compute H (e.g. in matlab, use

). Putting the obtained H into the matrix form, we obtain the homography from (u,v) to (x,y). Then given any image coordinate

, we can compute its corresponding floor coordinate

according to the homography relationship above. Do not forget to divide the scaling factor λ.

For our webcams, we tried the matlab calibration toolbox and found that the distortion coefficients are fairly small. Therefore, we choose the homography method to calibrate our cameras. This will make the calibration matrix and the computation a lot simpler than the full matlab calibration, yet still yields sufficiently good answers.

The calibration routine for the vision localization system uses 9 equally-spaced points per camera to find a mapping from the image coordinates to the real-world coordinates. The field of view of the four cameras must overlap the center horizontal and vertical dots that form a '+' shape. The center dot should be seen by all four cameras. The size of the dots is not significant as the system utilizes the center of mass of each dot to determine the "center" of the dot.

Twenty-five points are used to calibrate the cameras. The field of view must overlap the dots that form a '+'.

The program should now be running. Your calibration information will be recorded in Quadrant0.txt, Quadrant1.txt, Quadrant2.txt, Quadrant3.txt, and calibration_dot_spacing.txt. If you choose not to recalibrate your cameras next time, the data in these files will be used to generate the calibration matrices.

Using the 8-parameter homography calibration, the maximum calibration error is around 5mm, which is around 2 pixels error. 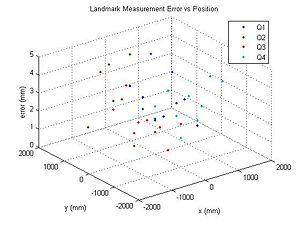 The absolute calibration error of the twenty-five landmarkers on the ground. Different quadrants are denoted by different colors.

We also attached below the matlab calibration results for the intrinsic parameters of one of the cameras (notice the fairly small distortion coefficients):

Hit 'p' to pause the program, and hit 'p' again to resume.

Note: There is no guarantee that all of the robots will receive the command, due to packet loss. It is advisable to send the command out multiple times to make sure the robots all receive it. You can use the arrow keys to find previously sent messages.

Enter commands in the following syntax:

You can also enter multiple commands at a time:

Press ESC to quit the program.

The Machine Vision Localization System is a robust system for tracking the locations of e-pucks with rotationally invariant patterns. However, several problems do exist as the transition from the paper "dice" patterns to LED light boards is being made.

Updates and Notes on Changes Made

Since the first implementation of the Machine Vision Localization System, several updates have been made to transition the system from the paper "dice" patterns to the LED light boards.