A wirelessly controlled robotic snake which uses a traveling sine wave and servo motors to mimic serpentine motion. The snake is capable of going forward, left, right and in reverse. 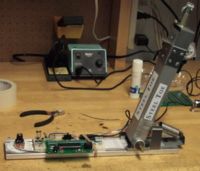