The main elements of the circuit were a PIC, DAC (Digital-to-Analog converter) and accelerometer. The PIC would store a discretized sine waveform with integer values from 0-255. It would then output a function of this sine wave (our control signal) to the DAC. The analog signal output from the DAC would be sent to the amplifier, which would then power the speaker. The accelerometer on the mass would feedback the actual acceleration profile of the mass back to MATLAB. MATLAB would then recompute the next control signal and repeat the cycle until the mass was moving with the desired acceleration profile.

Our circuit diagram is shown below. An optional component is a 24FC515 EEPROM chip (24FC515 Data Sheet). The 512 KB of memory could be used to store data to later be retrieved and processed by MATLAB. We found this to be unnecessary in our experimentation. Learn more about external memory and EEPROM's here.

The speaker car amplifier must be powered by a 12 volt DC source, to accomplish this we used an Emtel EMV15012v power supply (Emtel EMV15012v). A picture of the wiring terminals is shown in a figure at the right. When powering your amplifier, the "REMOTE" terminal must be powered high with 12 V for the amplifier to remain on. We included a switch here to be able to power on our amplifier separately from the power supply. Using the left low impedance input on the amplifier means the output will be on the CH1/L terminals. Using the low impedance inputs also requires an RCA cable. We had to cut this cable in half and strip the insulation coating in order to access the positive and negative terminals of the RCA jack. The outside ring is negative, and the inside hole is positive. A picture of the amplifier input is shown to the right.

We used a surface mount LIS2L02AS4 accelerometer. We set pins 9, 11, and 13 LOW to give us a 2g resolution. These chips read acceleration in 2 dimensions, we used the X-direction (pin 10) read by pin 02/RC0 on the PIC. You can read more about accelerometers here. 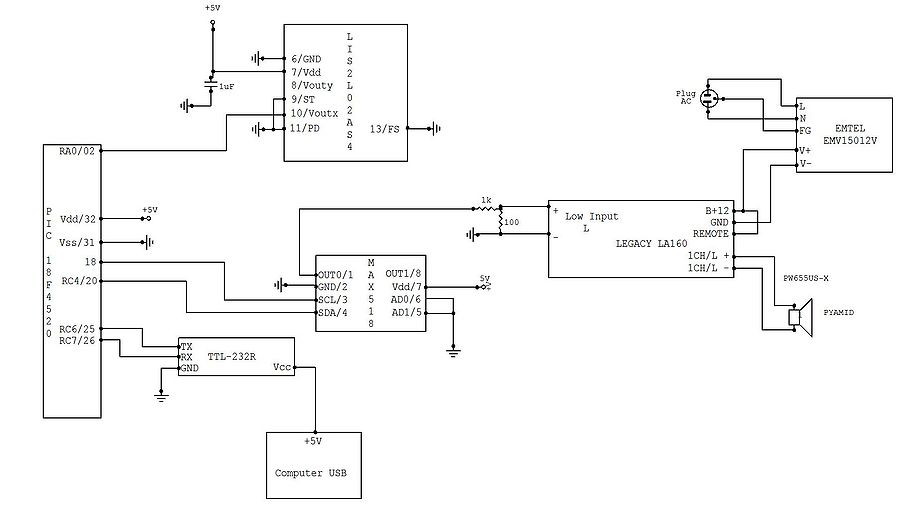