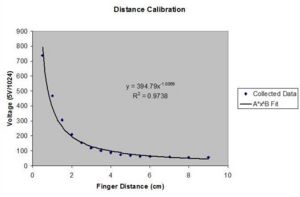 1) Ambient light: The overhead light saturated the phototransistor and so the laser was pulsed(the pic was programmed to strobe the laser) in an effort to provide a noticeable difference between the ambient and laser light. As noted above, a finger in front of the transistor cast a shadow which had a larger effect (due to the blocking of the ambient light)than the actual blocking of the laser. Be aware that as the experiment is done any shadow cast on the sensors by a finger or body part will affect the ambient light sensed by the phototransistor and should be taken into account.