Symbol for a diode:

We can take advantage of the properties of a p-n junction to make a diode, which is an electrical component that only allows current flow in one direction. A diode made of silicon needs about 0.7V across it in the forward direction (forward biased) in order to conduct. At a large negative voltage (reverse biased), the diode fails and the current forces its way though. This is known as diode breakdown.

A half-wave rectifier cuts off half of a sine wave, leaving only the positive or negative side (although not perfectly, because of the diode voltage drop).

The schematic for a simple rectifier:

The graph for half-wave rectifier:

An approximate model of a DC motor is a resistor and inductor in series. (For more details on DC motors, see the section on brushed DC motors.) If there is a current i through the motor, and we suddenly break the circuit by opening a switch, for instance, there will be a spike in the voltage across the inductor. This is because the current has to instantly go to zero (there is no longer a path for it), and the voltage across the inductor is proportional to the rate of change of current, vL = L(di / dt). This may exhibit itself in a spark at the switch. A mechanical analog of instantly zeroing the current through an inductor is bringing the velocity of a moving mass to zero, instantly.

To alleviate this problem, we can put a flyback diode across the motor terminals, as shown below:

The flyback diode must be sufficiently large to carry the potentially large currents of the motor.

Question: If the voltage supply is +10V relative to ground and the diode drop is 0.7V, what is the voltage across the inductor immediately after the switch is opened? Make sure you have the sign right, where positive voltage means the left side has a higher potential than the right side. (Remember, the voltage across an inductor can change discontinuously, but not the current, if there is any possible path for the current.)

We can make a peak detector if we hook up our circuit like this:

The graph of the input and output voltages looks like this:

Each time the input voltage dips, the diode prevents the capacitor from draining.

There are two problems with this circuit: First, the voltage at Vout is always one diode drop less than the maximum Vin. Second, the circuit has a very low impedance, and the capacitor drains a lot of current. A better peak detector can be built with op-amps.

A voltage clamp limits the output voltage, which is useful when we need to protect circuits from high voltages. We specify the maximum and minimum voltage we want by applying voltages across a diode. We must also take into account the voltage drop, so the voltages we apply should be Vmax − 0.7 and Vmin + 0.7

In this circuit, if Vin exceeds Vmax, diode D1 becomes forward biased and conducts, thus forcing Vout to stay at Vmax. If Vin drops lower than Vmin, diode D2 conducts and prevents the Vout from dropping any lower.

symbol for a zener diode:

Zener diodes have a low breakdown voltage, or zener voltage, and can allow reverse current to flow without being destroyed. A good zener diode can also maintain a fairly constant voltage over a large range of currents. The voltage-current graph of a zener diode looks like this:

We can use a zener diode to build a voltage regulator like this:

Vout is the reverse breakdown voltage or zener voltage. In the circuit, V is greater than VZ. This voltage regulator can only step down the voltage, not up.

Even if the current through the diode fluctuates, the voltage remains fairly stable. Choose a resistance R large enough such that the power specs of the zener diode are not exceeded, but not so large that it limits our current too much.

For example, if our diode has a zener voltage of 5V and can handle 1W, and our voltage source has a maximum voltage of 20V:

The largest amount of current our diode ever has to handle is the current through the diode when there is no external load. Therefore:

This means that we need at least 75Ω to protect our diode. Keep in mind that we must meet the power ratings for our resistor as well.

Because current is flowing through the resistor and diode even when there is no load, power is being wasted. We can do better with voltage regulator chips like a 7805 chip (78xx for xx volts).

symbol for an LED:

An LED is a type of diode that emits visible or infrared light proportional to the current passing through it (up to a maximum before it burns out).

A typical LED shines its brightest between 5mA and 30mA. Beyond its rated current, it may burn out.

A photograph of an LED

Notice that on the LED pictured at the right, one of the legs is longer. The longer leg is the positive terminal. However, do not rely on the length of the leg to determine the polarity, because you will probably snip the legs short later on. Instead, look at the side of the plastic lens, and notice that it's not perfectly round; one side is flattened. The flattened side is the ground. 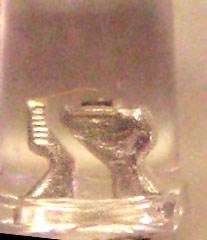 Symbol for a photodiode:

Go to the photodiode page for information on photodiodes.

The symbols for transistors:

For the transistors, we have the following relationship for the voltages and curents:

Under normal operation, BE is forward biased, and CB is reverse biased.

BJTs have three regions of operation:

Active (VBE ≈ 0.7V): IC = βIB (collector current is proportional to base current by factor β, which is typically about 100)

If Vin < 0.7V (same as the diode drop), the p-n junction is not forward biased, there is no base current, and IC is equal to 0.

Then we find Vin:

If we are using the transistor as a switch, we should fully saturate it to save power and reduce heat.

The emitter follower is a very simple current amplifier, taking advantage of the fact that IC = βIB. The high input impedance means that our imput signal does not need to "work" as hard.

If Vin > 0.7V, then the current is amplified by the npn transistor.

If Vin < -0.7V, then the current is amplified by the pnp transistor.

Beware that there is a “dead band” when Vin is between 0.7V and -0.7V, because the voltage has not pass the cutoff voltage for either transistor. This is known as crossover distortion.

Suppose we want to control the speed of a motor by varying the input voltage between +5V and -5V. We attempt to do this by setting put a voltage divider with a potentiometer like in the circuit below.

We model our motor with a simple resistor RL. If RL is infinitely large (no current flowing through), then there will be a 7.2V drop across R1 and R3, and Vin can take a value between 4.8V and -4.8V.

For the maximum voltage case (we turn the POT all the way to one side), our circuit with voltage sources looks like this:

We know that RL is not infinitely large because motors can draw quite a lot of current. If RL = 0 (short circuit), then the Vin = 0V. We can expect Vin to be somewhere between 0V and 4.8V.

We can solve the circuit with the following equations:

With our previous voltage regulator with the zener diode, we had the problems of the zener diode wasting power and needing a high power diode if there was a lot of current going through the diode. If we add an emitter-follower, we can use a much smaller diode and less current to achieve the same effect.

If we need a very high current gain, we replace a transistor with a Darlington pair. The current gain is now:

FETs are a type of transistor that uses a voltage input to control its conductivity (as opposed to using the current like a BJT). The input impedance is very high and thus draws very little current. There are three general types of FETs:

where G is for gate, S for source, D for drain, and B for substrate.

However, since B is usually connected to S, the symbol is often simply drawn as:

Electrons flow from the source to the drain, so the current flows from drain to source. The gate receives the input voltage. The gate pin is offset towards to source pin to help is differentiate between the source and drain pins.

JFETs are very similar to MOSFETS, but they only come in the depletion-mode variety. JFET consume little power, so they are often found in low-power applications. The symbols for JFETs are below:

Symbol for a phototransistor:

Notice that the phototransistor only has two legs.

The collector current of a phototransistor is proportional to the light or infrared light received.

A photodiode can also be used instead of a phototransistor in many applications; a photodiode cannot supply as much current, but has a faster response time.