-Be of a similar size to the E-Puck

-Be significantly less expensive than the E-Puck

-Be easy to manufacture

-Have an approximate run time of 1 hour

-Use the NU32 board for control logic

-Allow the user to specify the robot's configuration, (x,y,θ), in a global frame

-Allow the user to directly control the robot's wheel speeds 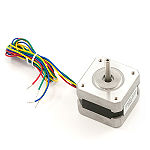 The focus of the chassis design was ease of manufacture. In order to achieve this, the chassis (and wheels) was designed so that it could be cut out of a single sheet of acrylic and simply glued together. The acrylic used came from McMaster-Carr and can be found here. In order to minimize the amount of acrylic needed, it was assumed that the circuit board would act as the top of the robot and the front and back were left as short as possible without compromising strength. The final chassis dimensions are W:90mm, L:90mm, H:75mm. As can be seen below, the batteries rest on the motors themselves, and, therefore, do not require any additional mounting structure.

The following is an image of the GUI as it appears when it is first opened: