In this example, we will be using PIC 18F4520 to control a double digit 7-segment display LTD-4708JS. A few notes about using this display is that it is only designed to display one digit at a time, so when trying to use both digits, you have to use a method to switch between the two digits fast enough to create the illusion that both are on simultaneously. We've made a simple loop that switches between the two digits every 5ms, but an ISR could also work.

To display a 2-digit number where a decimal point is needed, you will need a total of 7 outputs from the PIC. 4 for the value, 1 for the decimal point, 2 for each of the digits. However, since you will only be displaying 1 of the 2 digits at any given moment, you can use a logic inverter gate (74LS05) to reduce 1 output needed for selecting which digit to display. A logic inverter gate is a chip that will take an input and return a high if the input is low or low if the input is high. Finally, you will need to make a loop with a delay of 5ms to switch between the digits, or use an ISR if you will be doing other computations with the PIC. 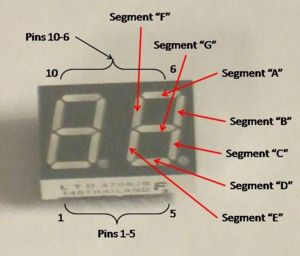 The controller used in this demonstration was the PIC 18F4520. The demonstration outputs were the digital output pins D0-D3 representing the output number in binary form. The PIC was not used to control which digit was used by the display (the display was hardwired instead to display only one digit). For a multiple-digit display a multiplexer could be used to decode a binary output from the PIC specifying the desired active display digit while the PIC outputs the appropriate digit on the data pins, although there is an upper limit to the number of digits which can be output while retaining a display frequency of greater than 45 Hz. This limit is dependent on the time between data outputs (likely to be calls of an ISR) used to display a digit. At 50 Hz each digit must be displayed every 20ms, so if the PIC outputs to a new digit every 4ms, then at most 5 digits may be displayed. 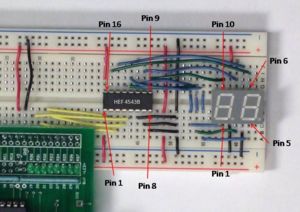 The code below loops through 00-99 with a 1 second delay and outputs them to D0-D3 and using simple delays for digit control on D4 and D5.