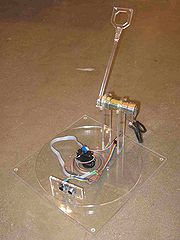 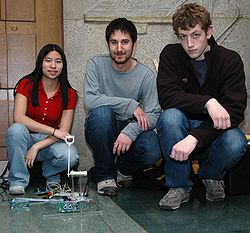 A throwing arm propelled by a Pittman DC brush motor is mounted on a turntable and throws the ball into the "hoop." The hoop is wrapped in reflective tape and an IR emitter, receiver pair is used to sense where the IR is reflected most (the hoop with highly reflective tape). An ultrasonic sensor then pings the hoop for the distance of the hoop. With this information, the arm is able to "make a basket." 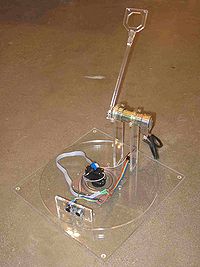 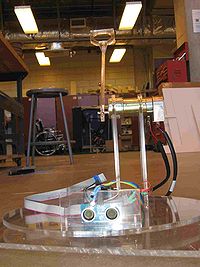 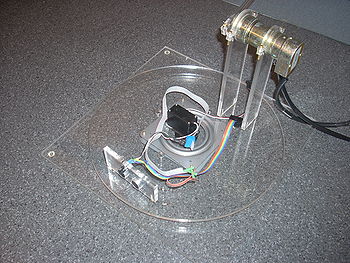 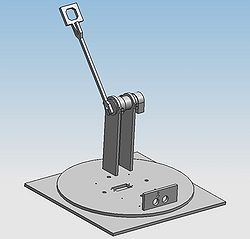 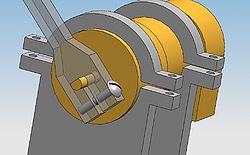 The two PICs communicated with a common ground and wire connecting RC6 and RC7 as shown in the diagram. The power supply was two 12 volt power supplies connected in series to give a total of 24 volts. 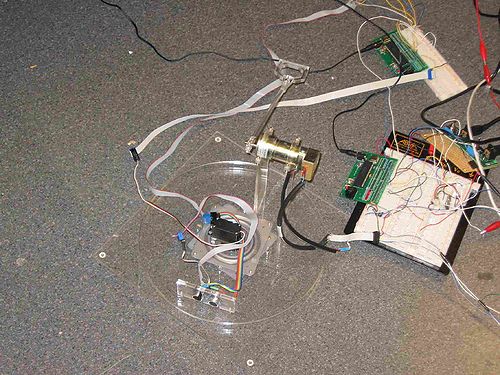 We used two PICs for this project. One ran the motor control since we wanted the smallest interrupt possible for the most accurate speed control. The other PIC ran the servo attached to the turntable as well as the infrared and ultrasonic sensors.

The motor was controlled using a PD controller which controlled both speed and position. Theory behind the controller was that if accurate speed control could be achieved along with the ability to control the release point by stopping the motor, we could control the distance the ball traveled to a high degree of accuracy having it follow simple kinematic equations. The launch was triggered when the ultrasonic sensor distance was sent to it. We opted against I2C and instead went with RS-232 for simplicity since we were only sending two bytes of data.

The turntable PIC controlled the RC servo, infrared emitter, infrared phototransistor, and PING ultrasonic ranger. The servo cycled through its full range while recording the maximum value from the phototransistor and its position in the servo cycle, returning to the position of maximum infrared light. The PING ultrasonic ranger was then used to determine the distance, which was then sent over RS-232 to the motor controlling PIC.

We used hardware encoders due to the speed of rotation of the shaft.

Theta was used for position control. Due to the way we implemented it, the motor was only was only allowed 359.9 degrees of rotation which was suitable for our launching arm.

In tuning the PD controller, it was found that different speeds needed different tunings in order to receive a smooth and accurate response. These values represent the best values we were able to obtain in tuning.

Set PWM values to make motor go forward or reverse. Also, the case where 'launching==1' is to return the arm to a loading position after the arm has shot a ball.

Set the motor's PWM and check for maximum and minimum values. 624 was used instead of 78 for PWM values based on how we set up our timer2.

PIC to PIC communication with RS-232

We choose to use RS-232 to communicate between PICs because of the small amount of data we were sending (a single int16) and to avoid the overhead required by I2C. We accomplished this by breaking our values into 8-bit chunks cast as chars and sending them one at a time.

This interrupt is called when the hardware RS-232 receives a byte of data. Once two bytes of data are received (int16), the interrupt reassembles them into a single int16 and calls CalculateAndLaunch().

Shot distance was based on a second order polynomial fit we obtained experimentally. The data we collected is shown in the image on the right. 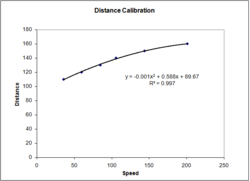