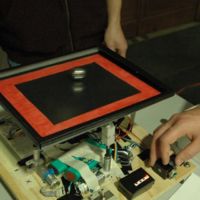 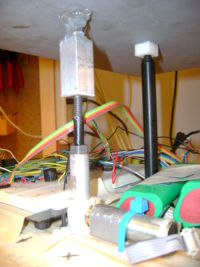 A sheet metal frame was built around the frame for protection, supported at its center of gravity by a pillar attached to the wooden base. The frame can freely tilt in two directions, allowing all possible ball movements. By raising and lowering two adjacent sides of the frame, the touch screen can be tilted in two directions. This motion is provided by two Falhauber motors mounted underneath the screen. The output shaft of the motors' gear boxes are attached to a threaded rod by couplers that we machined for the purpose. The couplers are attached to the motor shaft by a radial set screw and to the threaded rods by locking nuts. Riding on these rods are two threaded aluminum pieces, which are attached to the bottom of the frame via flexible tubing and epoxy. As the angle of the screen changes in one direction, the location of the attachment of the other motor moves slightly relative to the base of the motor. The flexible coupling allows for this motion, while providing vertical stability and transferring the up and down motion of the threaded pieces to the sides of the frame. Provided that the tilt angle remains small, its value can be approximated by the inverse tangent of the vertical motion of the threaded rod divided by 9cm (the horizontal distance from the tubing connection to the center of the frame). By controlling the speed of the motors via pulse width modulation, the tilt angles of the touch screen can be changed at a variety of speeds.