The Nondimensional 3DOF Bouncing Ball Simulator is a simple Matlab program meant to mimic the behavior of a bouncing ball on a vibratory device capable of sinusoidal motion in three degrees, such as the VPOD. The simulator uses a numerical method in which the equations of motion describing the ball's flight are determined from the state variables of the previous impact. The program uses a binary search to locate the time at which the ball's position in the x,z plane is equal to that of the oscillating bar. In short, it calculates the intersection of a parabola with a sinusoid, uses a simple impact model to compute the new state variables, and repeats this computation as many times as desired. The equations of motion for the oscillating bar are as follows:

where A_x, A_z, A_theta represent the maximum x, z, and angular displacements of the bar's motion. The key input variables are the three position amplitudes, three frequencies, and three phase angles, as well as coefficients of restitution in the normal and tangential directions.

In order to run the simulator, first download the Matlab files by clicking on the link below:

First, open the bBallSim m-file. The first few lines will look like this:

There are four important inputs for this version of the program.

For example, if one were to input the following:

This is setting a motion with zero amplitude in the x and theta directions. 0.0052 is the nondimensional equivalent of 8m/s^2 in the z direction. If this simulation is run for 100 impacts with e = [0.8 0.8], the following plot will be created: 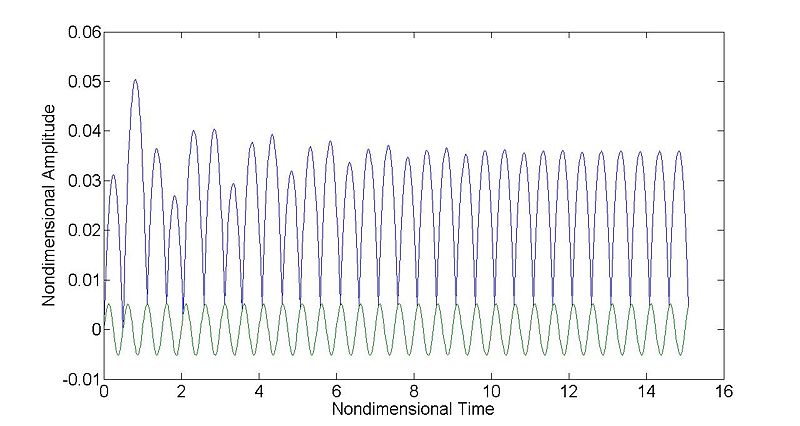 The following is a 399 Write-up from a 2009-2010 independent study conducted by Undergraduate Eric Bell. The paper uses data from both physical experimentation as well as the simulator described above. EBell-399FinalWriteup

Some of the data used in the write-up are included below:

The following contains both the raw data from the real and virtual cameras as well as the calculated a workspace containing the calculated 3D coordinates. This data was used to create Figures 2.3 through 2.5: Figure2.3-2.5 Data The zipped folder also contains the Matlab Figure files corresponding to the plots used in the paper.

The following is experimental data used to create the bifurcation diagrams shown in Figure 3.8 and 3.10. This data was also used for the examples of period 1 and period 2 m=2 behavior corresponding to Figures 3.6 and 3.7 in the write-up: Data for Bifurcation Diagrams This data was collected using 3 regions of interest (XZ- raw data from real camera, YZ- raw data from "virtual" camera, bar_tracking- raw data for bar's motion using real camera). This workspace also contains the calculated 3D coordinates of the ball (XYZ_BALL) as well as the adjusted coordinates of the bar (XZ_BAR). The Matlab function used to calculate these coordinates is pasted below.

The data for the experiment shown in Figure 3.12 can be downloaded here along with the plot. Data for Figure 3.12 In the workspace, the variable referred to as tau in the plot is saved as "ndPhase."

Other figures included in the paper: Miscellaneous Figures