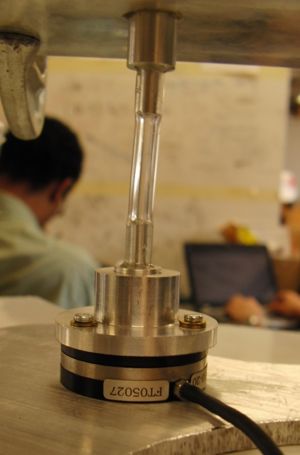 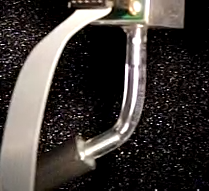 Flexures are deformable solid bodies used to connect elements in a mechanical system. This flexibility allows for greater freedom of motion of the parts relative to each other than a rigid joint does, but at the cost of complicating the dynamics of the system. As one can imagine, it is important to know the properties of the flexures in order to predict and control the behavior of a system. This project is primarily focused on the flexures used in the PPOD projects in LIMS which are used to connect the linear actuators to the table. In this case the flexures allow the table to move in all six degrees of freedom (three translational and three rotational) which the use of rigid joints would not allow. The goals of this project are to be able to test the performance of the existing flexures and to use this information to design new ones to improve the performance of the PPOD. The flexures currently on the PPOD are made of a 1/4" Tygon tubing glued to aluminum mounts. 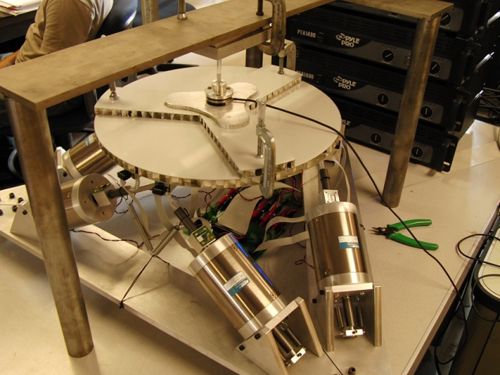 There are three basic pieces of hardware needed to characterize a flexure: a forcing mechanism that can move in all six degrees of freedom, accelerameters to collect motion data, and a six-axis force sensor to collect the forces and moments. The PPOD is used to force the flexures because it already collects acceleration data of the plate and it can control motion in all six degrees of motion at frequencies and amplitudes at which the flexures will be used.

Data collection is relatively easy and is done through the Flexure_GUI shown below. This graphical user interface shows the controller information on the left side and the force sensor information the right. 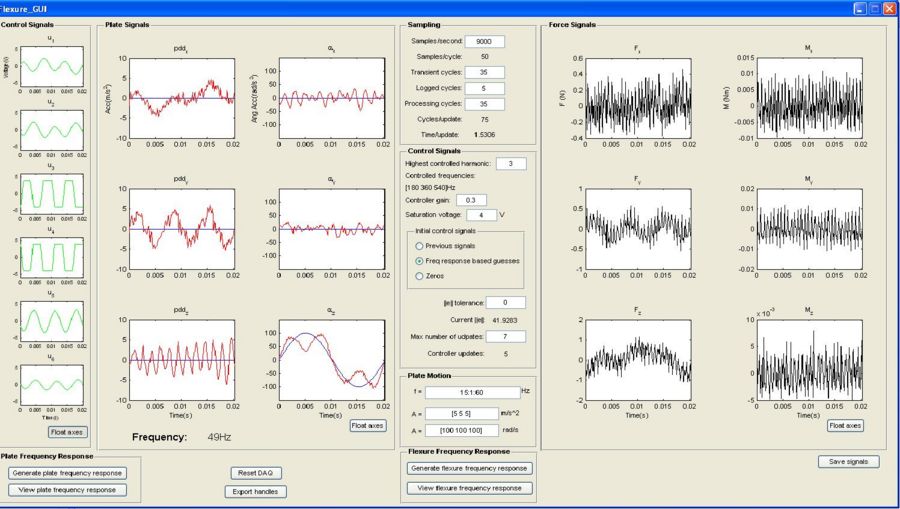 Until now, only a simple approximation has been used to describe the flexures when modeling the system. In reality, a flexure will have a mass, damping, and spring matrix as well as more complicated non-linear behavior associated with it that maps its motion to the forces it applies. For now we have assumed a second-order system of the form:

is a vector of forces and moments and

is a vector of coordinates. This leads to a transfer function from input acceleration Ai to output force Fj given by:

We then have to fit this model to each combination of the accelerations and forces for a total of 36 transfer functions, one for each entry in the mass, damping, and spring matrices. For this we used the MATLAB code found here. Read comments in the code for specific instructions on use.

Overall, this code will analyze the data output from the flexure test. It can be used to find the best fit transfer function, generate Bode plots for each transfer function against the data, and find the best-fit mass, damping, and spring matrices for the flexure. To find the best fits, we are currently using the Optimization Toolbox in MATLAB with moderate success. We still have to adjust the cost function that is being minimized in order to get better fits to the data since sometimes the optimization routine reaches its lower bound and gives spring and damping coefficients of 0 for some transfer functions. 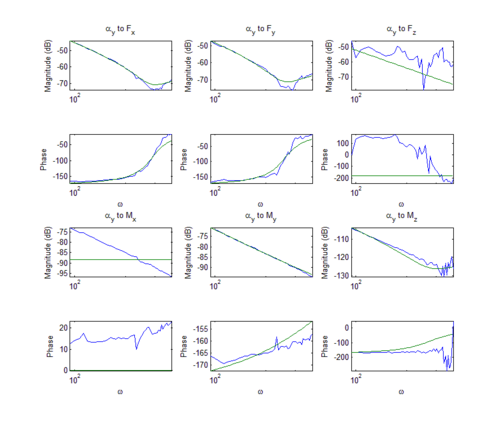 Due to the optimization inconsistencies, we have been able to find a full mass, damping, or spring matrix for a flexure. However other transfer functions are fitting very closely to the experimental data as can be seen in the figure to the right. These are the experimental Bode plots from rotational acceleration of 100 rad / s2 to each of the forces. Using the results from transfer functions that are fitting well, the spring coefficients for strongly connected motions are on the order of 1000 N/m (or N/rad) while uncoupled motions are much smaller at around 50 to 100 N/m. The damping coefficient for almost all of the "good" entries is around 0.7 Ns/m (or Ns/rad) and the masses are on the order of 30 grams, a reasonable number for the size and material of the flexure. Based on preliminary results, the damping of the flexures is relatively small and the spring coefficients are near the estimated value of 2000 N/m along the diagonal.

On a more qualitative note, when the flexures on the PPOD were changed from 1" of exposed tubing to 0.5", the PPOD responded much better than before. It was able to control in fewer updates and could control at higher amplitudes. One of the longer flexures had buckled, either due to the weight of the force sensor mount and C-clamps or failure due to fatigue. However, if the flexures are too short, then they will be too stiff and not allow enough motion. I believe there is an ideal length which we may be able to find with the flexure tester in the future.

Also we were able to take high-speed video of several flexure tests, which can be found on the PPOD Youtube channel. Looking at these we can confirm some of the results from the Bode plots.