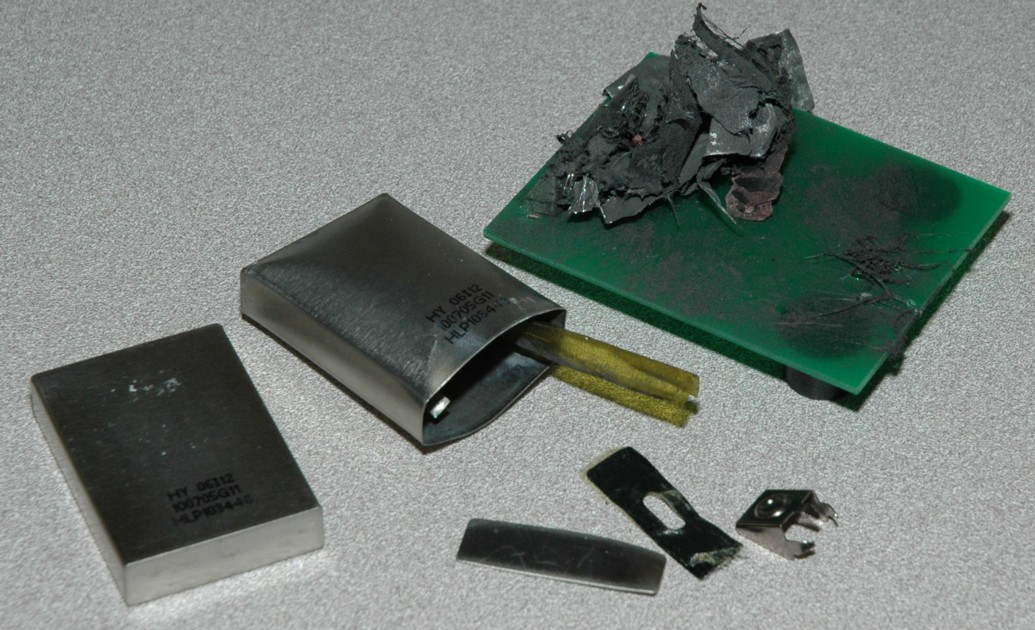 At the left of this photo you see the e-puck's 3.6V Li-Ion battery. Next to it you see one that was blown up during the charging process. I made a little board (with no electronics) to hold the battery, with two spring terminals at one end of the battery ("ground") and one button terminal at the + end of the battery. Then I hooked up a "smart charger" made to charge a 3.6V (or 3.7V) Li-Ion battery at 0.5 amps (though this company does not sell the particular battery used in the e-puck, so naturally this combination had never been tested before). I attached the + and - leads of the smart charger to the board's terminals as appropriate, then left my office for an hour while I attended a talk. When I came back, my office smelled of chemicals and smoke, and I found pieces of the internals of the battery in a blast radius of several feet around the spot where I had left the battery. The large shell portion of the battery was found on the floor about 8 feet away from where the battery was charging, next to a gash it had left in the plasterboard of the wall. So obviously it had ejected with quite a bit of force! The small metal piece that completes the shell of the battery had not gone far. As you can see on the remains of the charger board, the + button terminal was blown off, while the two - spring terminals remained, attached to burnt remnants of the battery's internals. The charger board had fallen to the floor by the table it was initially on, where it burned a 5 cm x 5 cm portion of the carpet (other smaller burns on the carpet were found scattered).

Lesson: you can't be too careful in charging a Li-Ion battery! If a particular charger-battery combination has not been fully tested before, only try it somewhere no one will get hurt and nothing important destroyed!